Who Are the Cuban 5?

The Cuban Five are Gerardo Hernández Nordelo, Ramón Labañino Salazar, Rene González Sehwerert, Antonio Guerrero Rodríguez and Fernando González Llort. They are sons, husbands, brothers, poets, pilots, college graduates and artists. Three of the Cuban Five were born in Cuba and two were born in the United States. Also three of them fought in Angola, during the war against apartheid. They are currently serving long prison sentences in the United States.

Since 1959, Cuba has been subjected to threats, sanctions, invasions, sabotage, and violent attacks on its soil, resulting in 3,478 deaths and another 2,099 wounded. It has thus developed vigilance against foreign attacks.

In 1976, 73 people died when a bomb exploded aboard a commercial Cuban airliner, destroying the plane in mid-air.  The masterminds behind the attack were two men of Cuban-origin, Orlando Bosch and Luis Posada Carriles, former CIA operatives whom currently live in Miami.

In the early 90s, following the fall of the Soviet Union, Cuba was trying to establish a tourism industry. Soon after, the right-wing exile groups in Miami started a violent campaign targeting tourist hotels and resorts, buses, airports and other facilities to discourage foreigners from visiting the island nation. In 1997, as part of that campaign, a bomb exploded in the lobby of Havana’s Hotel Copacabana, killing Fabio DeCelmo, an Italian tourist.  The Cuban authorities arrested Raul Ernesto Cruz Leon, a native of El Salvador who confessed to having been paid thousands of dollars by anti-Castro exile groups based in Miami to plant the bomb..

Due to the lack of response from the FBI to stop such attacks, Cuba sent the Cuban Five to Miami to monitor the organizations perpetrating these acts of violence. The idea was to gather information about similar acts that were in the planning stages in order to derail them before they were carried out. The Five were able to establish evidence implicating specific Miami exile groups and individuals in the attacks.

In 1998 President Fidel Castro sent a personal emissary to Washington to deliver a hand-written note to President Bill Clinton, asking that the United States indict and prosecute those who committed crimes against Cuba. In his letter to Clinton among other things Castro said, “If you really want to do so, you can put a stop to this new form of terrorism. It is impossible to stop this terrorism without United States involvement . . . Unless it is stopped now, in the future any country could be victimized by this new terrorism.” President Castro’s personal emissary was none other than Gabriel García Márquez, the winner of the Nobel Prize for Literature. At the time President Clinton was out of town and after waiting for him for several days, García Márquez finally met with White House Chief of Staff Mac McLarty on May 6, 1998 and gave him the letter.

In the wake of the Garcia Marquez visit, the United States sent an FBI team to Havana a month later to discuss collaboration with Cuba on stopping acts of aggression emanating from Miami. At the meeting Cuba handed over 64 files containing the results of its investigation into 31 different terrorist acts and plans against the island in the decade of the 90s. The Cuban government enclosed details of operations against Cuba, including photographs of the explosives used.

Cuba then waited for the FBI to start arresting the architects of these operations, but instead,on September 12, 1998, it arrested the Cuban Five; the very men who had come to Miami to monitor the activities of the violent Miami exile groups.

After their arrest, the Five spent 17 months in solitary confinement cells. The trial took place in Miami and lasted 7 months. They were charged with 26 counts of violating the federal laws of the United States. 24 of those charges were relatively minor and technical offenses, such as the use of false names and failure to register as foreign agents.

On August 9, 2005, the convictions of the Cuban Five were overturned by the 11th Circuit Court of Appeals in Atlanta . The court ruled that Miami venue was a violation of the Five’s right to a fair trial.

On June 4, 2008, the three-judge panel affirms the convictions for Gerardo Hernandez and Rene Gonzalez but send to Miami the case of Ramon Labañino, Antonio Guerrero and Fernando Gonzalez to be re-sentenced by the same Judge that convicted them in the first place.

On January 30, 2009, the defense team petitions the U.S. Supreme Court to hear the appeal for the Cuban Five.

On June 15, 2009, with no explanation, the US Supreme Court refused to review the case of the Cuban Five.

On October 13, 2009, the United States District Court in Southern Florida imposed a new sentence of 21 years and 10 months in prison to Antonio Guerrero, who was serving a life sentence plus 10 years.

On December 8, 2009, the United States District Court in Southern Florida imposed a new sentence of 17 years and nine month to Fernando Gonzalez, who was serving a 19 years sentence and of 30 years to Ramón Labañino, who was serving a life sentence plus 18 years.

Initial List of Endorsers of the Third “5 Days for the Cuban 5” in Washington D.C. 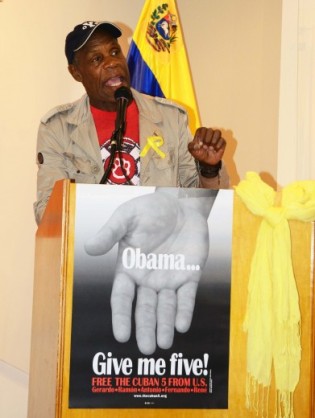 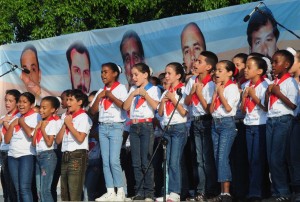